Why do you need a Fully Connected Layer?

Deprecated function: The each() function is deprecated. This message will be suppressed on further calls in menu_set_active_trail() (line 2405 of /var/www/numahub.com/includes/menu.inc). 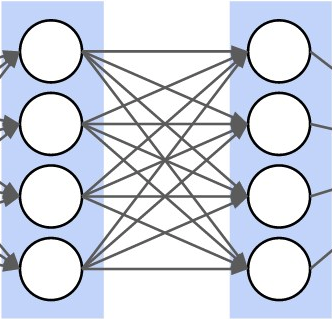 A Fully connected layer is the actual component that does the discriminative learning in a Deep Neural Network. It’s a simple Multi layer perceptron that can learn weights that can identify an object class. You can read about MLP in any ML text book.

If you take a simple 1-2 layer neural network the weights are learned so that an input can be discrimanted into various classes.  Now this network works great when you have structured data (like housing prices) where you know what kind of information will be coming in an input channel/column.

When people tried to use 1-2 layer Neural network for computer vision they ran into issues like the actual object could be tilted, distorted, scaled or repositioned – which means a particular kind of information could come in any of the input features/columns or group of features  - together. The Neurons in the simple network are tied to one fixed area of the image and become activated only when the object is in that portion. Clearly this did not work well.

Consider a Deep Neural network which has X-Y-Z input layers and a last FC Layer (with say 100 inputs). X, Y and Z could be Pooling, Convolution etc.

All the earlier layers X,Y,Z in a Deep Neural network work together to come up with a scale and position invariant representation of the input image such that whenever a particular object is found anywhere in the input image, a fixed column (or some fixed columns) in the FC Layer becomes activated.  Its like if you see a Chair anywhere in the image activate column 10, 11, 80 and 99. (Disclaimer: Oversimplified)

Now due to this  magic, the information coming in input columns to the last FC layer are fixed (like in Housing Prices example) and a Discriminative learning is easily possible.